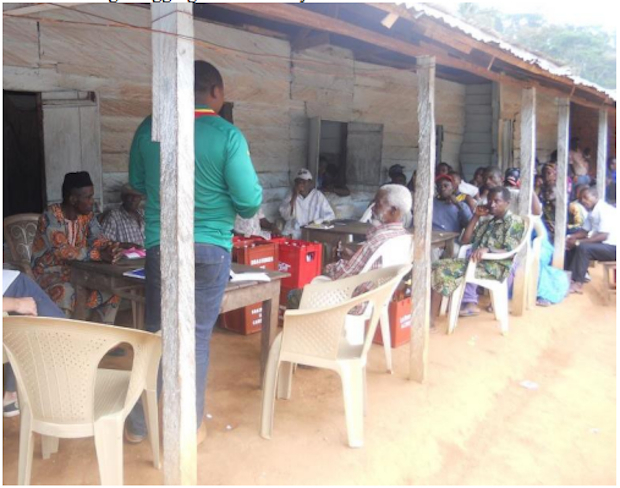 Mokango community gathered around food and beer provided by Herakles Farms
(SGSOC) to settle land negotiations. Photo: PSMNR. To outsiders, beer and food may look like nothing more than a kind gesture. But in a region where a bottle of beer is an unaffordable luxury for many, providing beer and food during negotiations is a questionable practice.

If you want to understand the problematic nature of palm oil development in Cameroon, there’s a must-read report now available online.

The Programme for the Sustainable Management of Natural Resources (PSMNR), a German government-supported program of Cameroon’s Ministry of Forestry and Wildlife, has published the results of its February 2013 fact-finding mission to the Herakles Farms palm oil development area.  The team’s findings paint a damning picture of the so-called “sustainable” and “environmentally benign” project. The report details illegality, corruption, inadequate community consultation and insufficient environmental protection across the concession area.

The report is available on the Cameroon Veritas website. Cameroon Veritas is the go-to source for reports and documents related to the Herakles Farms project (including a leaked copy of the project’s Establishment Convention).

Greenpeace has published several reports on the project, including one in collaboration with the Oakland Institute. The Center for the Environment and Development and RELUFA, two Yaounde-based organizations, have also published reports on the Herakles Farms project. The company has attacked these reports, dismissing them as uninformed and biased. This latest report, prepared by recognized experts on behalf of a governmental program, will be hard for Herakles Farms to dismiss out of hand. This is not the work of “activists,” but a detailed account of an official mission.

The report describes the fact-finding mission’s methodology, which included open discussions with community representatives in villages throughout the concession area (the villages and participants are included in the report):

The team explained that PSMNR wasn’t against Herakles Farms (SGSOC) project but wanted to ensure that the community was fully aware of what they were negotiating. These sessions were organized to enable communities to reflect and take a better informed decision towards the Herakles Farms (SGSOC) project and better negotiate with the company. For those who have already entered into the negotiation process, the team provided recommendations on what bases to re-negotiate the agreement which can better contribute to their development and to the conservation of their natural and social environment.

Some of the report’s findings:

The negotiation is not transparent and also differs from one village to another. SGSOC negotiation methods are clearly not respecting “Free Prior and Informed Consent” process (FPIC) principles. “FPIC implies that communities have the right to decide whether they will agree to the project or not once they have a full and accurate understanding of the implications of the project on them and their customary land”. Communities should be informed on what is a large scale plantation, on the positive and negative impacts of Herakles Farms (SGSOC) project in the short, medium and long term. Communities should also be made aware of other development models and on the contribution of the forest to their livelihood.

During the negotiation sessions the Communities are convinced to concede as much land as possible without taking into account their own future development needs. The agreed maps showing the surface area conceded are then signed by the village Chiefs on behalf of the traditional council and later on by local government officials. The Communities are obviously neither prepared nor equipped for such technical negotiations with Herakles Farms (SGSOC) experts since they don’t master land use mapping and land negotiation processes. Some chiefs have declared that they did not realize what they were getting into and are now trying to renegotiate with SGSOC.

The report adds that, “most of the villages would obtain more money with REDD+” than what the company will pay. And, of course, “with REDD+, those villages would still enjoy their customary rights and would still benefit from the environmental services provided by the forest.”

Cameroon Veritas provides a valuable public service in a country where land and extractive industries deals are notoriously opaque.

One thought on “A fact-finding mission to Herakles Farms”