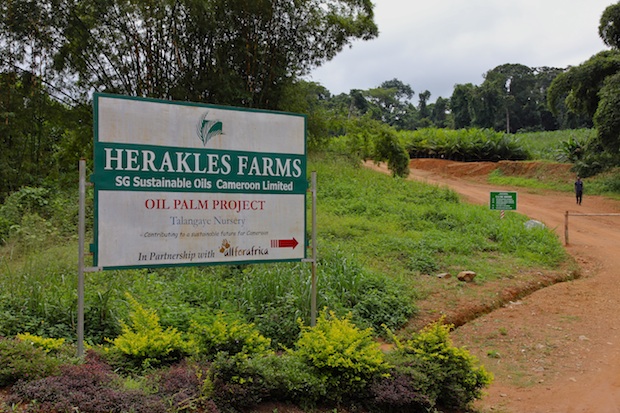 Herakles Farms, known in Cameroon as SGSOC, has issued a public statement regarding the suspension of its operations.

The 73,000 hectare Herakles Farms project has been extremely controversial since communities first became aware of its existence. As numerous reports and observers have documented, the initial contract (the September 2009 “Establishment Convention”)  was the result of secret negotiations between the company and Cameroonian officials. Communities were only “consulted” after the fact and although the company has been negotiating directly with villages in recent months, its consultation practices — often involving gifts and other incentives — have been widely criticized.

For several weeks rumors regarding Herakles Farms have been circulating on the ground and the company has finally responded with this statement:

May 18, 2013 ‐ Herakles Farms (also known as SG‐SOC in Cameroon) (“Company”), a United States‐based agriculture company with operations in Ghana and Cameroon, today, announced that it has suspended work in Cameroon in response to an order it received from the Government of Cameroon’s Ministry of Forestry & Wildlife (MINFOF).

The order requests that the Company cease preparing land near its Talangaye nursery, the resumption of activities “being subject to a declaration of public usefulness made to the zone where your entire project is located.” The order comes at a time when the Company’s main activity is the transfer of young trees from the nurseries to their permanent places in the field near the village of Talangaye. The Company had obtained permission to proceed and always has and will comply fully and transparently with government regulations in force.

The Company hopes to understand and resolve these actions by the MINFOF.

Given the uncertain timeframe for resuming development, SG‐SOC is reducing and furloughing its workforce of 690 full‐time employees. Herakles Farms’ management reaffirms their commitment to the successful development of their operations in Cameroon. The Company is diligently working with Cameroonian Government officials to resolve the matter as quickly as possible.

The Company is deeply distressed to see so many of its committed Cameroonian employees being left without jobs for an uncertain period of time. In addition, the Company’s community and work force development programs will remain in doubt until a resolution with the Government of Cameroon can be found. The company finds these events especially tragic and will do all it can to achieve a positive outcome.

Herakles Farms is an agriculture company that identifies and implements solutions to important food security concerns in Africa. The Company has had operations in Ghana since 2008 and in Cameroon since 2009. Herakles Farms is guided by the International Finance Corporation (IFC) Performance Standards and Equator Principles. www.heraklesfarms.com

Note: The company’s statement raises many questions  about the project and its future. The company makes no mention of the sale of its seedlings to Pamol. The number of employees of Herakles Farms has not been independently verified. Herakles Farms states that it has had operations in Cameroon since 2009. This is misleading. The company signed a contract in September 2009, but as the December 2010 minutes of an inter-ministerial commission show, as of late 2010, the boundaries of the proposed concession were still disputed.  At that time, a representative of the Ministry of Forestry and Wildlife indicated that, “SG SOC did  not respect the procedure for submission of files and other ministries concerned were not included in the project.” More than 11,000 hectares of land included in the Herakles Farms concession were already attributed to others (community forests, council forests).