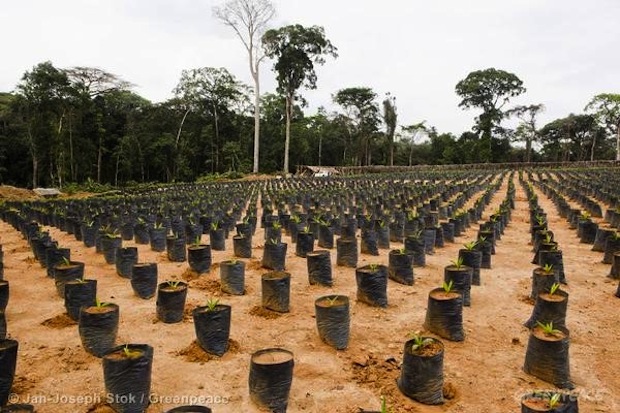 From Greenpeace: Despite a judge issuing an injunction in August 2011 ordering a halt to all operations on the nursery, Herakles Farms was continuing to operate it illegally in February 2012 when this photo was taken. 02/15/2012 © Jan-Joseph Stok / Greenpeace

That’s the headline from today’s Greenpeace blog, posted below. When Cameroon’s Minister of Forestry and Wildlife (MINFOF), Ngole Philip Ngwese, suspended Herakles’ operations in the Southwest Region the mood in the concession area was joyful. Talk of Herakles’ departure from Cameroon spread rapidly across Cameroonian social media networks. But local activists and attorneys said it was too soon to celebrate: the suspension was temporary and the matter of Herakles Farms was far from resolved.

The recent news that Ngwese has lifted the suspension is troubling on many levels. There is no information available for communities who want to understand what is happening. Those directly impacted by the project are in the dark.  A dispatch from AFP suggests that Ngwese was under pressure from the Prime Minister to lift the suspension and hints at a power struggle, but the unattributed comments don’t give us much concrete information. The government flip-flopping on Herakles Farms has been going on for some time now and as each new turn of events gets reported, Cameroon’s credibility slides further downhill.

Samuel Nguiffo of the Center for the Environment and Development is one of several respected civil society activists who have called on the government to put a moratorium on all large-scale land deals. The government of Cameroon needs to clearly define what type of foreign agricultural investment it wants (domestic food production vs. export commodity crops) and needs to have a transparent legal framework in place for all investment. If procedures exist, but companies like Herakles Farms can bypass them completely and sign a massive deal behind closed doors, the laws are meaningless. Herakles Farms is indicative of a much larger problem. The lack of transparency and accountability harms local communities, the environment, Cameroon’s reputation abroad and the country’s ability to reach its own Vision 2035 development goals.

There was dancing in the streets of Mundemba and Fabe when the news came two weeks ago that the Cameroonian government had suspended Herakles Farms’ forest clearing operations.

Communities in this region of South West Cameroon, who had feared that they would lose their lands and their livelihoods to Herakles’ industrial palm oil plantation, now believed that their forest had been saved.

The news was also welcomed, if slightly less exuberantly, by Cameroonian NGOs and international agencies in the capital, Yaoundé. I met with many key actors who described the suspension as a brave and right decision which will make Cameroon’s business climate more attractive for international investors. By suspending this project, which would have devastating social and environmental consequences, the government was reinforcing its credibility in the eyes of the international community.

So I, like many others, was shocked to learn that the suspension had been lifted last week, without a single word of explanation. The allegations of corruption and violations of national law that have been fired at Herakles Farms’ project since its inception have not been addressed, let alone resolved.

These allegations were described in detail in a report launched by Greenpeace International and the Oakland Institute in the same week that the suspension order was made public. Through a series of internal company communications, the report demonstrated how Herakles Farms has systematically mislead the government and investors.  These documents showed that the company apparently knew it was operating in Cameroon without all required permits and authorisations, and that bribery may have been used in the attempt to gain consent for the project.

Recently, it seems increasingly clear that the company is also facing serious cash flow issues. This means that the company is not a viable long-term development partner, and will not be able to deliver on all the promises that it has made to local communities,  the government and investors.

By enforcing the suspension, the Cameroonian government had shown that it was putting the interests of its own people above those of foreign companies. By reversing it, the communities who were dancing with joy only two weeks ago now feel frustrated and abandoned.

Greenpeace is calling on the Cameroonian government to stop this project, and for a moratorium on the allocation of all large-scale land concessions in Cameroon until safeguards are introduced to protect the livelihoods of local communities and the forests on which they depend.