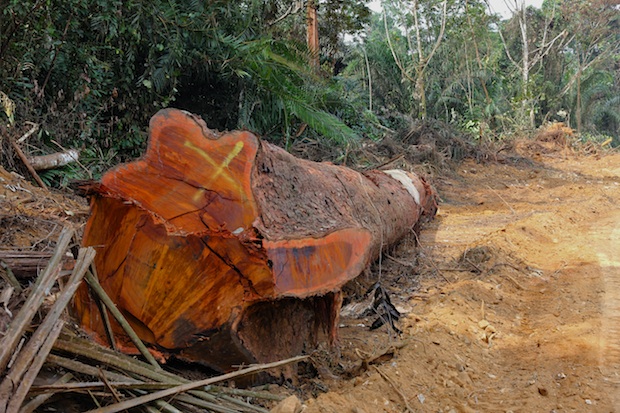 Industrial agriculture is the main cause of deforestation around the world. That’s no surprise. And according to a recent study commissioned by the British organization Forest Trends, at least half of the tropical hardwoods sold today are the the by-product of deforestation for agriculture. The same study also indicates that more than half of the forests converted to agricultural use were done so illegally. The wood coming from those operations should also be considered illegal, but for now, this is not usually the case.

Developers use the proceeds from timber sales to finance agricultural operations. In some cases, developers may be more interested in timber than agriculture and an agricultural project may be a logging operation in disguise. Consider the case of the controversial Herakles Farms project in Cameroon. The land Herakles acquired was not available for logging, but now that the company is developing an oil palm plantation (on paper, at least), it is clear-cutting forest and looking to profit from timber sales. At this point, it is unclear that the company will proceed with planting and it is possible that it may simply sell timber before selling the project.

Herakles Farms is not alone in this questionable practice.

Filip Verbelen of Greenpeace, Belgium, has written an interesting article on the relationship between palm oil and illegal logging, which we’re posting. 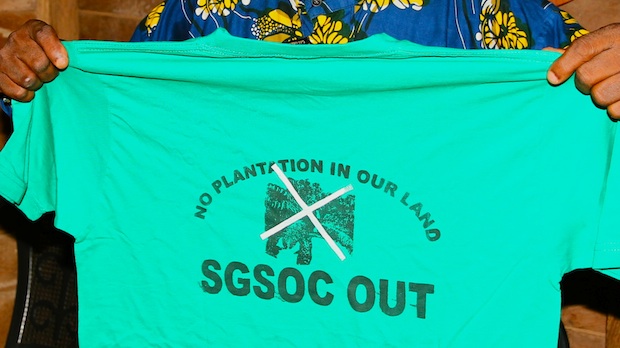 In late May, the Oakland Institute and Greenpeace International publicly released internal documents of a New York-based corporation which is in the midst of constructing a massive palm oil plantation in the world’s second largest rainforest. The communications have brought to light an age-old tale of greed and deceit wrapped in the wholly modern packaging of international development work and green consumerism.

At the heart of this story is Herakles Farms (HF), a subsidiary of venture investment firm Herakles Capital: a heroic name which aptly frames the gallant branding necessary to secure support. On its public site, the phrases “sustainable”, “poverty reduction” and “environmentally benign” are used liberally to describe the forthcoming plantation. However, as the leaked documents reveal, behind the scenes lies a very different story, one which shows a startling disregard for the noble goals on which Herakles claims to be founded.

At the helm of this venture stands CEO Bruce Wrobel, a man who extols the company’s sustainability mission, going so far as to declare: “Throughout my entire life I have considered myself to be an environmentalist and an activist for the poor.” Yet the company is constructing what it claims will be among “the largest palm-oil plantations in all of Africa” – an area roughly 12 times the size of Manhattan – in a hotspot of biodiversity. Last year, after complaints about Herakles to the Roundtable on Sustainable Palm Oil (RSPO) highlighted the company’s alleged environmental violations, Wrobel made no attempts to set the record straight. Instead, Herakles resigned from the Roundtable before the claims were to be investigated, spuriously stating that they “remain committed” to RSPO’s standards.

Shockingly, Herakles’ wayward actions continued with brazen attempts to pull the wool over the eyes of many more than just its “green” supporters. As the documents reveal, the company also appears to be knowingly lying to its investors about its viability and financial health.

Perhaps the most important debunking of Herakles’ claims by Greenpeace and Oakland is the well-guarded secret that the company is operating without all required permits in Cameroon, and therefore, the legality of its operations is questionable. In communications with investors, Herakles assures that it has “secured a 99-year lease… and also received all required permits and approvals to commence field operations”. But in an internal communication, a senior Herakles official states unequivocally: “We do not have the required government approvals for field planting.”

Cameroon’s Ministry of Forestry and Wildlife has on numerous occasions – the most recent, just last month – formally warned the company to stop felling trees until it receives the necessary approvals. Among these missing approvals is a signed presidential decree required to validate the leases of all land concessions of more than 50 hectares on public lands in Cameroon. Yet despite its many reproaches, Herakles proceeds with impunity.

Not only is Herakles knocking down the trees, but the company assures investors that it will go on to sell the timber, which it believes will result in “a potential upside of $60 to $90 million over the next seven years”. Yet in an open letter, written by CEO Wrobel in September in an attempt to pacify the project’s growing number of critics, he stated: “We surrendered the timber to the government [for] a lower lease rate.”

This unabashedly two-faced style of negotiation by Herakles betrays a greater truth: that many foreign investors see Africa as the new Wild West where laws can be bent at will. The laws seem to become particularly pliant when the company is, as one senior employee reveals to be the case for Herakles, “in a cash crunch”. The fact of Herakles’ operations appears to be that Wrobel and his cohort are in over their heads and are desperate to cover their shortfalls.

The company did, however, take its public mission to address “a dire humanitarian need”, straight to the communities and local leaders. It did so by dangling the promise of hospitals, jobs, food security and “tremendous long-term benefits”, and managed to gain pockets of consent in the area, to which it now clings as proof of its right to operate.

In the meantime, local people have come to terms with the notion that they have been hoodwinked by Herakles. Their dreams of stronger infrastructure began to evaporate at the moment when, instead of hospitals and jobs, the only new features to materialise in the area were red tape perimeters and warning signs, flaunting the fact that their land rights had been forfeited.

Now villages and local NGOs have mobilised – and they are seeking support from international civil society organisations to undo what amounts to a herculean human rights and environmental catastrophe. This is a sobering lesson for all parties involved – that the land rush by foreign investors into African nations is not philanthropically driven, despite claims to the contrary. Rather, companies such as Herakles Farms have exploited images of poverty and hunger, and couched their efforts in the language of sustainability, allowing them to handily reap profits from Africa’s resources while undermining national laws, local communities and the environment.

While investors may have initially bought into Wrobel’s multi-tiered façade of the perfect “sustainable” investment with the promise of mega-returns, it is time to come to terms with the fact that they, too, are among the victims of Herakles’ many deceptions. But the time is now to begin to make things right, and the first step is to help the Cameroonian people free themselves from Herakles’ greenwashed snare by demanding accountability.

This is not a rebuke to the very real efforts to bring infrastructure and aid to Africa. However, it must serve as an imperative for the international community to proceed only with the understanding that Africa is open for business, not for theft.

The views expressed in this article are the author’s own and do not necessarily reflect Al Jazeera’s editorial policy.