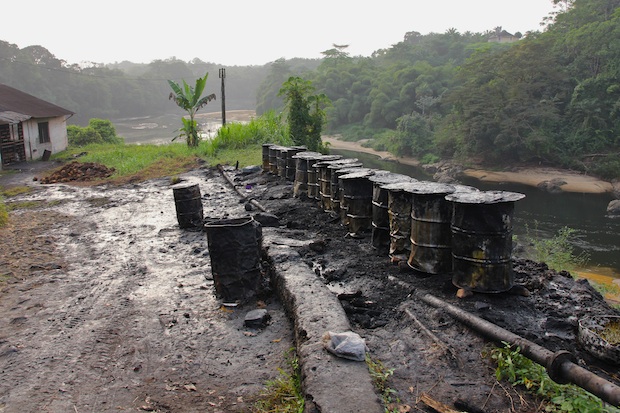 In Southwest Cameroon a PAMOL palm oil mill is located just across the river from Korup National Park, a recognized  global biodiversity hotspot.  Stand on the bank of the Mana River and you’ll see primary forest on one side and oil palm plantations on the other. If you’re standing at the top of the bluff that leads down from the mill to the old river port, you’ll also see a stream of brown, greasy liquid flowing into the river and covering the beach with sludge. When the water is calm an oily sheen stretches from bank to bank.

From WWF: “A palm oil mill generates 2.5 metric tons of effluent for every metric ton of palm oil it produces. Direct release of this effluent can cause freshwater pollution, which affects downstream biodiversity and people. When POME is not released directly into rivers it is often discarded into disposal ponds, its contaminants polluting the soil and groundwater and releasing methane gas into the atmosphere.” 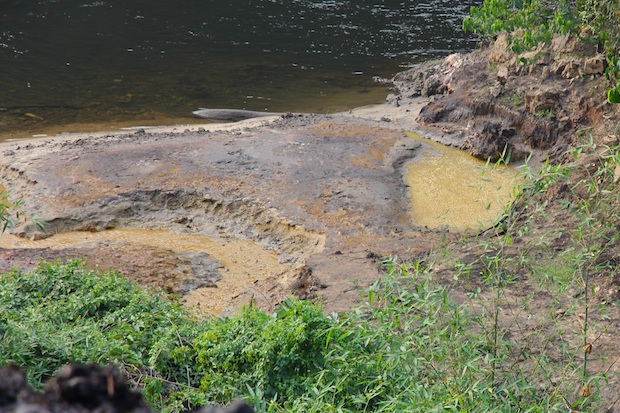 Read more about POME and what to do with it here.

“The environmental impact of POME cannot be over emphasized,” write Nigerian researchers J.C. Igwe and C.C. Onyegbado in the introduction to their report, A Review of Palm Oil Mill Effluent (Pome) Water Treatment. It’s a fairly technical report that provides a detailed description of POME pollution and treatment.

Palm oil mills don’t have to pollute. Palm oil plantations don’t have to cause deforestation. Smallholder farmers can be involved. Labor conditions can be improved. Yes, things can be done differently. But if the current state of affairs is anything to go by, there’s cause for alarm. 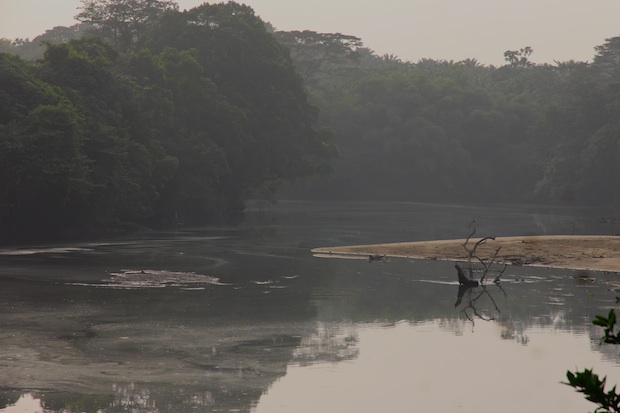 Illegal logging is rampant. Plantation labor conditions are appalling with workers often paid less than Cameroon’s minimum wage (approximately US$60/month). Environmental regulation is weak and rarely, if ever, enforced. The palm oil projects currently in the pipeline in Cameroon are the result of secretive deals with zero transparency and no community involvement. The government is reportedly allocating vast expanses of land to foreign companies for next to nothing:

“The contracts signed between governments and oil palm developers are being kept secret, reducing transparency and democratic accountability. Those contracts that have come to light show that governments have already signed away some of the potential economic benefits, by granting developers extremely generous tax breaks of 10 to 16 years and land for ‘free’ or at highly discounted rates.” (Seeds of Destruction, Rainforest Foundation U.K.)

If Cameroon is prepared to lease land for US$1 per hectare per year, one can wonder how much concern the government has for the forest or its inhabitants.