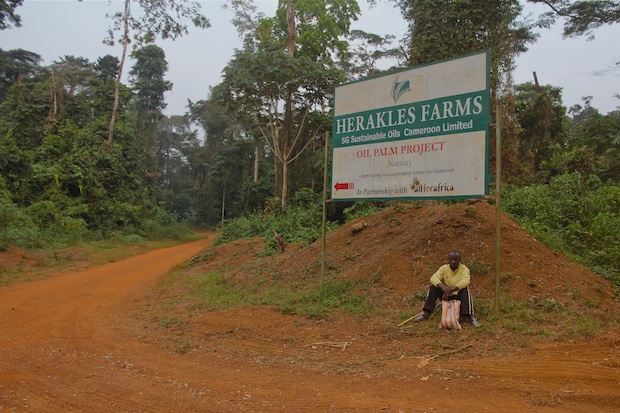 Cameroon’s president, Paul Biya, has signed an official decree allowing Herakles Farms to proceed with the development of a controversial palm oil plantation in the country’s Southwest Region. In response to widespread opposition, the project has been downsized from 73,000 hectares to 20,000 hectares. It’s unlikely, however, that the reduced plantation size will satisfy critics who opposed not only the immense footprint of the proposed plantation, but also the methods of the company.

Greenpeace Africa and the Oakland Institute are alarmed by the decision of the Cameroonian government to award US agribusiness company Herakles Farms a three year provisional land lease to develop a palm oil plantation in the South West region of the country.

According to the two institutions, the move disproves Herakles Farms’ claim that it had all the necessary permits from the start, and confirms that the company has in fact been operating illegally for more than three years.

The project, originally envisaged to cover more than 70,000 hectares but with a provisional land lease now accorded for approximately 20,000 hectares, has been dogged by controversy from the beginning. Work and forest clearing has been conducted in violation of national law, despite fierce local opposition, and would destroy a forested area of vital biodiversity surrounded by protected areas.

“A downsized project does not resolve the problems related to the palm oil project by Herakles Farms,” said Irène Wabiwa, forest campaigner with Greenpeace Africa. “It simply remains the wrong project in the wrong place, as the impact on communities’ livelihoods and the forests remain unacceptable.”

“The opaque and illegal manner in which the project has been carried out demonstrates the threats to Africa’s forests if operations like this are allowed to proceed unchecked.”

By signing a provisional land lease, the Cameroonian government is also putting at risk a partnership with the European Union and Germany, who have a long standing relationship with the Cameroon government to help protect biodiversity and promote good governance in the forest sector.

“The Cameroonian government has shot itself in the foot with this decision.  They are making it clear that under the guise of “investment” virtually anyone can get away with illegal activities in the country and even be rewarded for it. It will be the government itself and the Cameroonian people who lose out from this,” said Anuradha Mittal, Executive Director, the Oakland Institute.

International palm oil companies and investors are increasingly targeting Africa for new projects. The Herakles Farms plantation, if not stopped, would set a bad and dangerous precedent for this type of large-scale plantation development in the region.

The Government of Cameroon could still make a better choice, by stopping the Herakles Farms project and adopting clear safeguards for palm oil development in its national policies.

Finally, Greenpeace is calling on palm oil companies and investors to commit to zero deforestation policies that protect Africa’s forests and the livelihoods of the people who live there.