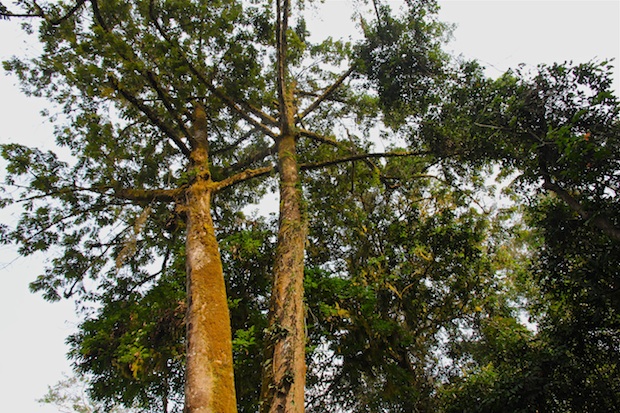 Southwest Cameroon. Forest or oil palms…what will feed the planet?

“As world population climbs from 7 to a projected 9 billion people and emerging and developing economies demand ever more of the food and fiber that drive deforestation, many environmentalists ask with increasing urgency whether and how tropical forests can survive,” write Steve Schwartzman and Ruben Lubowski of Environmental Defense Fund. Their recent article, Can Saving Forests Help Feed the World, asks, “whether and how the world’s increasing, and increasingly rich, population can be fed unless tropical forests survive.”

Schwartzman and Lubowski’s article is one of a series in response to the question, “How do we feed the world and still address the drivers of deforestation?” The articles are available online at the Skoll World Forum website.

Noting the connection between global warming and global agricultural output, the authors note, “Putting total global greenhouse gas pollution on a fast and steady downward trend may be the only way to avoid serious risk of catastrophic disruption of world food supplies.  Tropical deforestation and agriculture together account for about a quarter of GHG emissions in approximately equal proportions. In addition, tropical forests hold some 300 billion tons of carbon.”

Those who argue that new palm oil plantations are necessary for “development,” who seek to frame the debate in terms of “jobs vs. trees,” seem to be at odds with scientific evidence.

But how to translate evidence into action? Another article in the series, Strong ‘No Deforestation’ Commitments Save Forests and Feed People, by Scott Poynton, Founder and Executive Director of the Forest Trust, makes the case for zero deforestation practices.

“We need strong ‘No Deforestation’ commitments enforced by companies throughout the supply chain with mechanisms to reward and teeth to punish,” Poynton writes. “They fit with the market and are simple: “Deforest and I will not buy your product”. This great start is made exponentially stronger when contracts are cancelled because suppliers are engaged in deforestation.”

Does that sound unrealistic? Poynton believes change is already happening: “The world’s largest food company, Nestle, the world’s second largest palm oil grower, Golden-Agri Resources and now, the world’s third largest pulp and paper company, Asia Pulp & Paper, have already made super strong No Deforestation commitments that are being implemented as we speak. Such commitments turn bulldozers off – now. They do not require workshops, meetings, millions of dollars or the creation of complex markets with thousands of mitigation measures. No Deforestation commitments send strong signals through the existing multi-trillion dollar globalized market – via global supply chains – and forests are being protected today as a direct result.”

For more on the need for zero deforestation, read Fred Pearce’s recent article on biodiversity in previously logged forests.