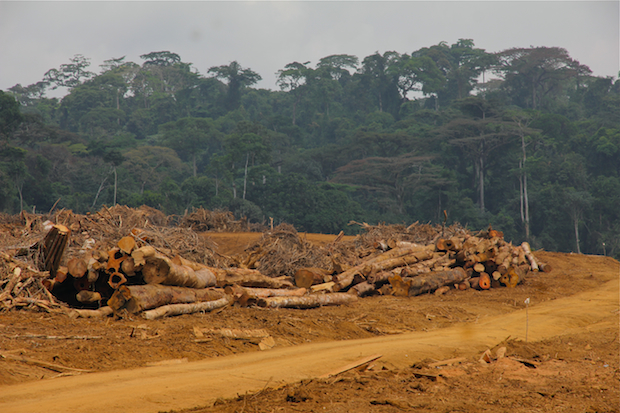 In a strange about-face, the government of Cameroon has authorized Herakles Farms to resume clear-cutting in the Southwest Region. This decision comes only a few weeks after the government ordered the company to halt all operations until it could produce a “declaration d’utilité publique,” a legal prerequisite for the work. The letter lifting the suspension of clear-cutting makes no mention of the required document and only reminds the company that it must follow laws and regulations. Several observers have suggested the latest letter is likely indicative of a power struggle, with someone higher in rank than the Minister of Forestry and Wildlife ordering that work resume.

In the meantime, here is a press release from WWF Cameroon and the Center for the Environment and Development, a respected Cameroonian NGO:

Herakles Farms is free to resume its tree felling operations in Cameroon, according to a Ministry of Forestry and Wildlife document obtained by local and international NGOs Wednesday, a blow to local communities and the unique biodiversity of the region.

The decision came as a surprise as in April the same ministry had ordered the US-based company which intends to cut up to 73,000 hectares of pristine rainforest to develop an oil palm plantation, to suspend operations until it had obtained legal authorization to do so.

“This is incomprehensible,” said Ludovic Miaro Iii, WWF Regional Palm Oil Coordinator in Central Africa. “On the one hand, we have a company which is operating without requisite permits on public lands, in clear violation of national and international social and environmental norms. What Herakles Farms is doing is a de facto land grab.

“On the other hand, we have the government of Cameroon which seems to be encouraging this company to circumvent national legislations and the rights of local people,” Iii added.

According to a 29 May 2013 letter by Cameroon’s Minister of Forestry and Wildlife, Ngole Philip Ngwese addressed to the CEO of SG Sustainable Oils – the local affiliate of Herakles Farms – the “suspension of tree felling operations of announced in my (previous) correspondence is hereby lifted.”

Palm oil cultivation is a contributor to greenhouse gas emissions, deforestation and the loss of biodiversity worldwide. Improperly designed and managed, it deprives local communities of access to land and impacts food security.

“Herakles Farms has consistently shown a complete disregard for Cameroonian laws and local community rights,” according to Samuel Nguiffo, head of the Cameroonian NGO Centre for Environment and Development.”

“The Ministry Forestry and Wildlife of Cameroon itself, in a February 2013 report, accused Herakles Farms of intimidation and bribery in its dealings with chiefs and local decision-makers.”

“Furthermore, should the project go forward, local communities who depend on their traditional lands and forest for their livelihood will be pushed away, leading to increased food insecurity and social instability,” Nguiffo added.