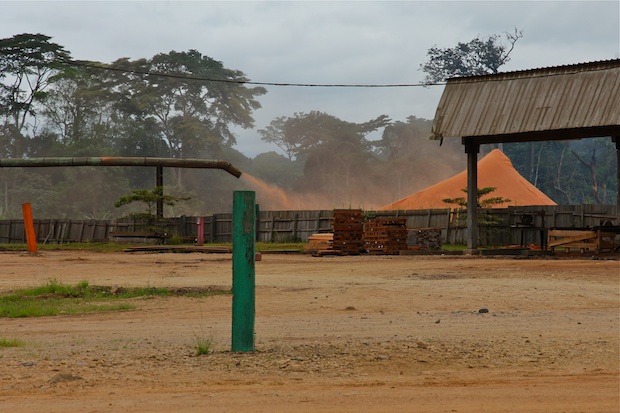 Although deforestation across the Congo Basin has not been as dramatic as in West Africa where the rainforests have largely disappeared, logging and illegal logging are serious threats. In Cameroon, for example, more than 13% of the country’s forest cover was last between 1990 and 2005 due to logging, agriculture and the search for fuel.

The increasing number of palm oil concessions across the Congo Basin, some granted to companies with no agricultural experience, has raised suspicions that certain concessions may be “timber grabs”.

Seeds of Destruction, the new report from the Rainforest Foundation (U.K.) describes the case of Atama Plantations, a 470,000 hectare palm oil project, in the Republic of Congo:

Previously, Wah Seong has principally been involved in the manufacturing of specialist metal pipes for the oil and gas industry. The company’s only previous connection to oil palm in Africa was the supply of equipment for palm oil refineries, and this will be its first venture into the oil palm plantation industry….

Stock-watchers have questioned how Wah Seong can afford the costs of developing the massive new oil palm plantation, which they estimate at US$650 million. One analyst has suggested that the cost “could be partly offset by forest clearance such as sale of logs”. This has often happened in the past in Indonesia. Evidence obtained by RFUK suggests that the forests Atama is planning to convert are indeed primary forests with significant timber stocks. The potential profits from harvesting this timber may be one of the main driving factors behind the development.

In 2012 the company had already harvested almost 15,000 cubic metres of timber at its first development in Epoma in Sangha, yet had thus far only cleared 120 hectares. If most of it is primary forest, by a rough yet conservative estimate, the 180,000 hectares the company plans to convert could yield timber worth more than $500 million.